Yell Out for Our Most Outspoken Glider this Christmas!

Help launch our annual appeal for the yellow-bellied glider!

It’s that time of year again! Giving season is here again, and it’s time to launch Wildlife Queensland’s annual Christmas Appeal. This year, we’re urging you to raise your voices, shout from the ‘treetops’ and help us gather funds to save Australia’s noisiest gliding mammal.

It’s been another tough year for many, even in this lucky country. With the ongoing pandemic, many Aussies are suffering. Sometimes, when the going gets tough for our supporters and their families, it likewise gets tougher to continue being a passionate – and sometimes necessarily strident – advocate for wildlife conservation.

However, here at Wildlife Queensland, we refuse to let the vulnerable suffer in silence. We’ve promised to be ‘your voice for wildlife’, so we’re taking a leaf out of Australia’s second-largest glider’s book this Christmas and urging our supporters to ‘Get Vocal!’ and help us save a loveable, local loudmouth – the yellow-bellied glider.

The yellow-bellied glider is the largest of the wrist-winged gliders in the genus Petaurus, and Queensland has two genetically distinct populations.

In the north – where it is known as the fluffy glider – a fractured population is already listed as endangered. In the south, Petaurus australis australis is forced to coexist alongside humans in remnant sclerophyll forest along the eastern seaboard. Habitat fragmentation and population declines saw this southern subspecies relisted in November 2021 as vulnerable under the Nature Conservation and Other Legislation Amendment Regulation (No. 2) 2021.

Unfortunately, this glider’s habitat has been altered and bisected by roads, farms or suburbs, separating populations and leaving them at risk of entanglement in barbed-wire fences or predation by cats, dogs or foxes. In the absence of enough reserve land to sustain populations, many of these gliders inhabit private property.

Unlike the mostly silent, larger greater glider, yellow-bellied gliders are far from sedate and are usually heard rather than seen. Of Australia’s ten currently recognised gliding mammals, yellow-bellied gliders are definitely the most vociferous. Their nocturnal noises include blood-curdling shrieks, clicks, pants, whirrs and throaty rattles (check out their haunting calls in our appeal video or on Youtube), but their vocalisations are not the only thing that’s unique about these gliders. 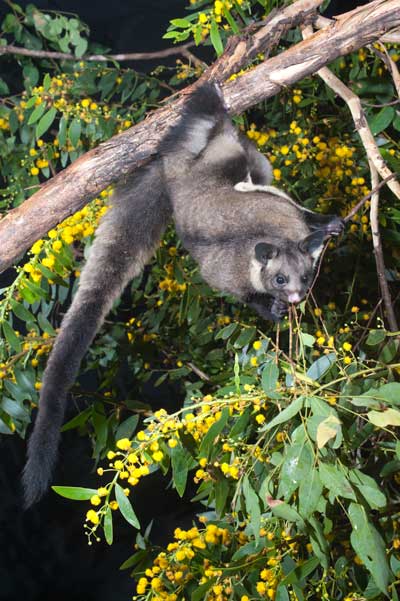 Well, if you count their very long, expressive tail, that is! The yellow-bellied glider’s ~48 cm tail is longer than its head and body length combined and is often held semi-erect and moved somewhat like a cat’s. They also possess a septated (two-part) pouch, although twin joeys remain rare. And they’re easily identified by their distinctive cream to yellowish tummy and by a dark margin lining the gliding membrane, which runs from wrist to ankle. On top of that, they can volplane more than 100 m, outstripping even the greater glider for the distance record.

With the eponymous scientific name of Petaurus australis, the yellow-bellied glider is arguably the most ocker of our gliders, too. It is gregarious, curious and generally more larrikin-like than its brethren. It’s also territorial – and loud about it.

‘Because they’re nocturnal and have no real eyeshine by spotlight, yellow-bellied gliders often fly – or glide – completely under the radar,’ Josh explains. ‘But once you hear their eerie calls, it’s a sound you never forget. For us, and our volunteers who help out in the field, they’re such a joy to find, watch and listen to.’

Other Australian gliders usually only vocalise sporadically or when threatened, but the yellow-bellied glider readily responds to recorded calls that Josh and his volunteers play back – and it even vocalises in mid-air. That’s why acoustic monitoring is the best way to find them (hear more about what Josh has to say about that here).

‘It’s truly breathtaking to see them glide, but they’re also curious and playful in the treetops, often dangling upside to check us out,’ adds Josh. ‘We’ve been working with some fantastic, cooperative property owners around Logan and Mt Tamborine, but we really need landowners near Mt Cotton and elsewhere to get on board and allow us to survey their properties for this vulnerable, outspoken species.’

What are we doing to help them?

It reads like a bit of a marsupial horror story, but in the fragmented forests no one can hear yellow-bellied gliders scream …! And because these gliders sleep in a communal den in a tree hollow by day, some property owners don’t even know they’re there.

That’s why our Christmas Appeal urges people to #yellout and focuses on promoting their calls and raising awareness of these charismatic marsupials.

Please help us discover more about this species! 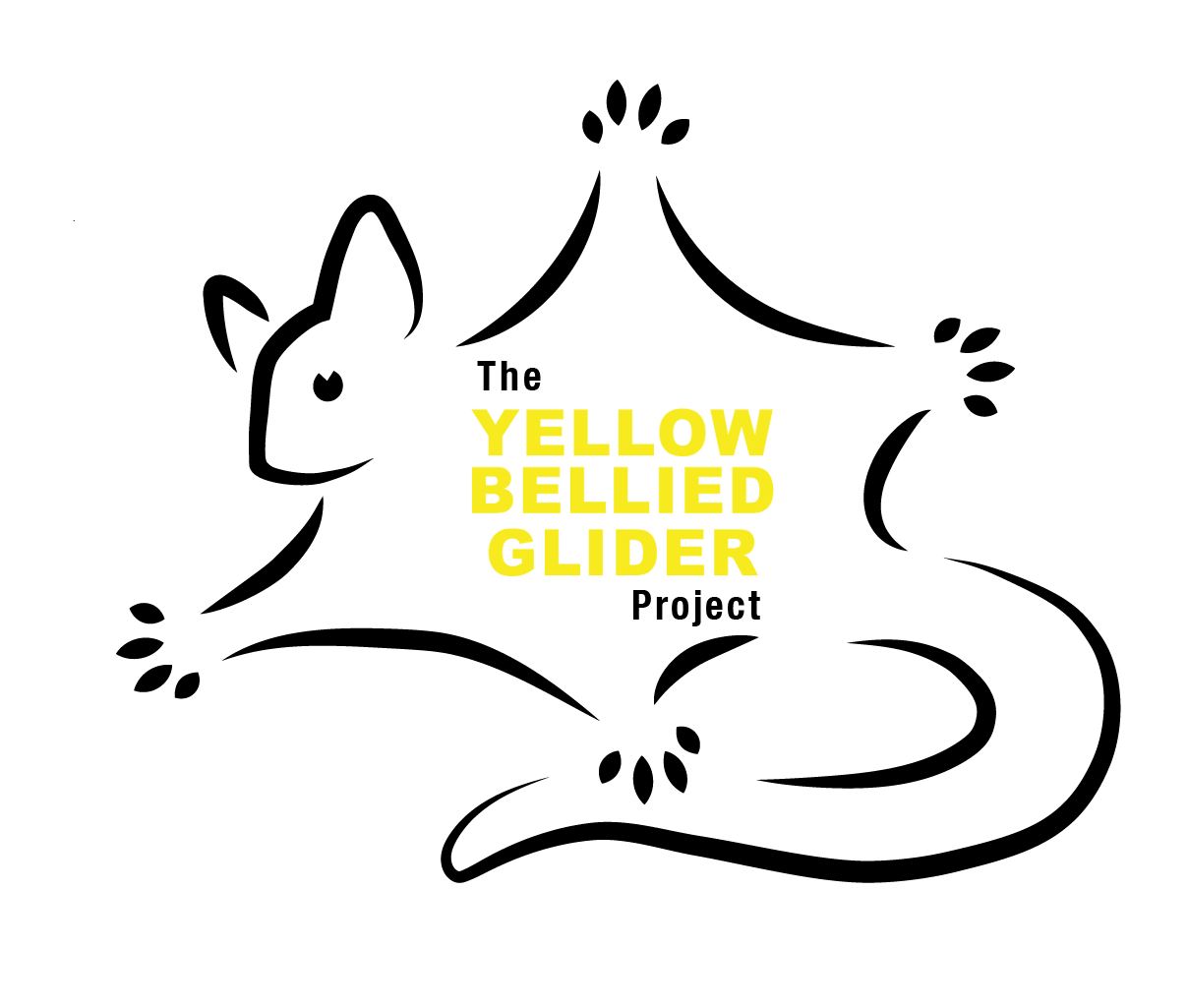 Nesting in family groups or small harems makes life difficult for large hollow-dependent marsupials like this glider, as bigger hollows are required. It also means scientists are unsure whether they will use specially constructed nest boxes in the absence of natural hollows.

Researchers already know yellow-bellied gliders are fussy about which trees they choose to tap into to dine upon sap ­– often relying on the same tree for years – but they still aren’t sure exactly why they prefer certain trees over others, or how their dietary and denning preferences change from region to region. As a result, this Christmas Appeal’s donations will help our Yellow-Bellied Glider Project team:

The Yellow-Bellied Glider Project team is committed to urgently filling in the data gaps around this vulnerable glider’s conservation in eastern Queensland, so please donate generously today, share our appeal, and #yellout for the yellow-bellied glider on social media before it is too late.