Join Wildlife Queensland’s Quoll Seekers Network and Park Ridge Connect, along with expert presenter Paul Revie, to learn more about Logan’s incredible and endangered quolls and how you can help find them and save them.

When: Saturday 26 March from 10 am to 12:30 pm
Where: Kingdom Life Centre, 3922 Mt Lindesay Highway, Park Ridge, Qld
How: Book online with eventbrite.

Does the elusive ‘spotty’ dwell near you?

The spotted-tailed quoll is the Australian mainland’s largest carnivorous marsupial and is nationally endangered under the Environment Protection and Biodiversity Conservation Act 1999. So rarely seen is this spotted marsupial, which was once widely known as the ‘native cat’, that conservationists are concerned the species may be locally extinct throughout much of its historical South East Queensland range.

Sporadic sightings and roadkilled individuals have been reported in the Logan Local Government Area over decades. Wildlife Queensland’s quoll experts believe that densely vegetated pockets within Logan and around the Park Ridge area may be among the last strongholds for this species close to Brisbane.

“Part of the problem,” explains Paul Revie, Wildlife Queensland’s Quoll Seeker’s Network Project Officer and President of Quoll Society Australia Inc, “is that quolls are naturally wary predators. Many landholders would be entirely unaware of their presence, and others may not even know what a quoll is, let alone recognise the secondary signs that suggest a quoll may be in residence.” 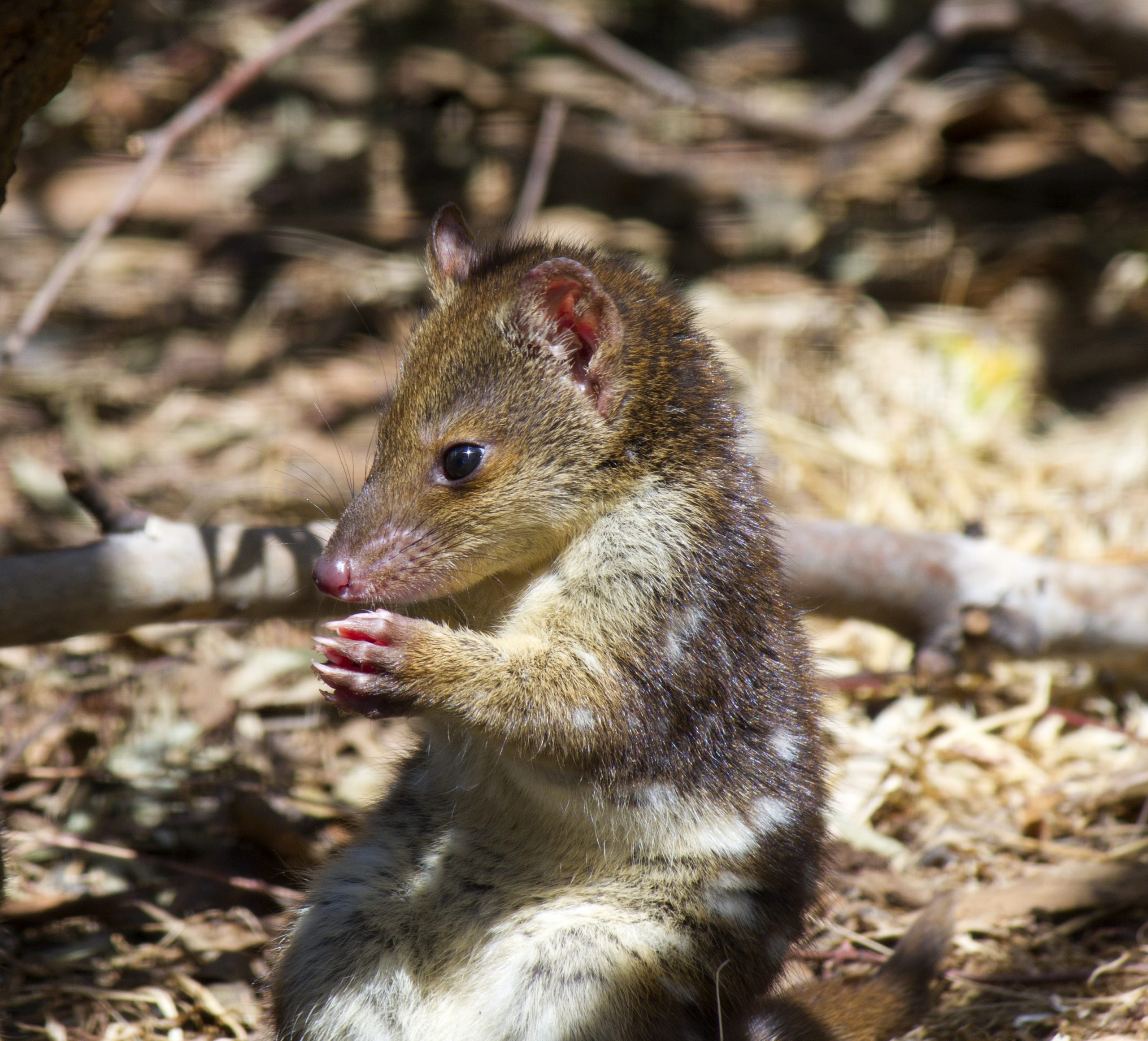 Spotted-tail quolls are curious but cautious and are well-camouflaged in woodlands, especially at night. Image: JudithDeland/ Lizardstomp_Flickr

Quolls occupy an environmental niche as native apex hunters of birds and other small-to-medium-sized mammals such as possums, wallabies, and even introduced rabbits. Australia is home to four quoll species. Two species – the tiny northern quoll (Daysurus hallucatus) and the much larger spotted-tailed quoll (Dasyurus maculatus) – inhabit Queensland.

Spotted-tailed quolls are agile tree-climbers that move along the ground or in the trees by night, sheltering by day in one of several dens within hollow logs or in rocky crevices over an 800–2000 ha territory. Over the past 200 years, development and land-use changes have dramatically reduced quoll habitat, restricting their movement and fragmenting populations in semi-urban areas.

Despite being seldom seen, quolls may leave traces of their presence, including distinctive footprints, multiple scats left in shared latrines (which act as a kind of quoll ‘message board’), bits of hair and even bones and skulls – either of prey or of deceased quolls. Disturbances in chicken coops may also signify a quoll is nearby. As they also consume carrion, spotted-tailed quolls are sometimes encountered scavenging roadkill, which places them at high risk of vehicle strikes.

We know they’re out there, but where?

In 2019 and 2020, Wildlife Queensland’s Quoll Seekers Network, Carnarvon Canines and the University of Sunshine Coast Detection Dogs for Conservation team worked with Logan City Council to discover spotted-tails quolls in Logan. Despite positive evidence of quoll scats on a property at Lyons, no quolls were sighted during the effort. Properties tested at Wolffdene and Park Ridge South failed to reveal strong evidence of quolls, but the Quoll Seekers Network team remained hopeful. In 2021, environmental DNA analysis of a quoll scat at Undullah confirmed that quolls do still occupy Logan. The challenge to find and study live quolls in the area is ongoing.

In late 2021, Paul Jackson from Park Ridge Connect, realising how integral Logan is to the survival of this endangered species, approached Wildlife Queensland’s Paul Revie for an article in Park Ridge News.

“I was blown away by how rare and little-known these carnivorous marsupials truly are. If we don’t publicise the plight of the spotted-tailed quoll and meet its conservation needs, it seems very likely that we’ll lose it – just as Australia lost these quolls’ larger relative, the Thylacine,” Jackson says. Park Ridge Connect has sponsored the Quoll Discovery Day to raise awareness of quolls within Logan.

We have the tools and the team, but we need help to find them in time…

“Spotted-tailed quolls persisting around the Greenbank, Lyons, Undullah and Park Ridge regions would be making use of reserve land as well as private property to hunt and den,” says Revie. “By helping landholders and locals identify and detect quolls and their secondary signs, we hope to increase the number of sightings and pinpoint locations to check for quolls.”

Conservation tools like motion-sensor wildlife cameras, acoustic monitors, microchipping and GPS collars, laboratory testing of scats and, crucially, quoll detection dogs (which sniff out latrines to alert their owners to quolls) can help Wildlife Queensland study populations. “Population and location data that tells us where quolls are persisting and in what numbers is critical to conserving this charismatic species. We desperately need Logan landowners to alert Quoll Seekers Network to any sign of this endangered species,” Revie says.

Places for this Covid-19 safe event are limited to 100 people, so book online today to save your spot. 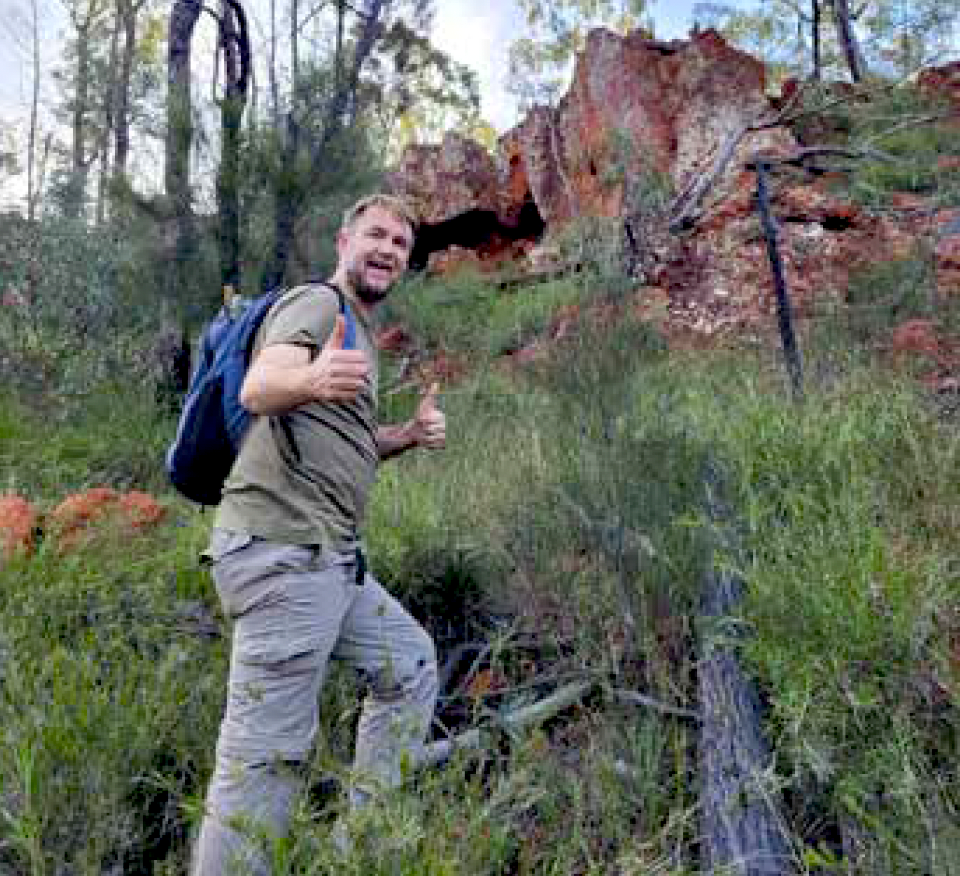 Paul Revie is an ecologist and zoologist who spent several years as a nature guide in Tropical North Queensland, showing tourists around the geological wonder of the Undara lava tubes before working as the senior ecologist for a local environmental consultancy. Five years ago, Paul founded the Quoll Society of Australia Inc, a research group dedicated to the conservation of the spotted-tailed quoll in southern Queensland. He has since worked closely with the Quoll Seekers Network, and his ongoing master’s project involves the identification of individual quolls from camera trap images in order to assess population numbers and densities in national parks around Tenterfield, New South Wales. This year, he has been GPS collaring quolls in Girraween National Park to uncover the secret lives of the mainland’s largest native carnivorous marsupial. Paul is also heavily involved in surveys for greater gliders, powerful owls, and other threatened species with the Friends of Nerang National Park.

Have you already spotted a quoll?

If you see a quoll, please report it to Quoll Seekers Network and record your sighting on our Atlas of Living Australia Biocollect survey site.

Stay up-to-date with the latest QSN project information and news on the QSN webpage and QSN Facebook page.