Summer is now upon us, but throughout late winter and spring, Wildlife Queensland’s Richmond Birdwing Conservation Network members have been eagerly watching their vines for signs of Richmond birdwing butterflies and their larvae.

Anecdotal sightings of these beautiful butterflies are rising as we continue our mission to ‘Bring Back the Birdwing’ and plant 1000 vines in specifically chosen corridors throughout South East Queensland. From the Glasshouse Mountains and Beerwah, to Wongawallan and south to Wollongbar and Alstonville in New South Wales, our dedicated butterfly watchers were thrilled to report adults and caterpillars on their vines — some of which were planted up to a decade earlier. 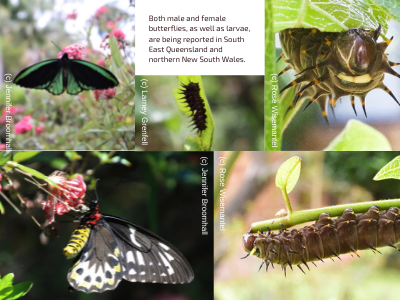 The Richmond birdwing butterfly is Australia’s largest subtropical butterfly, with a wingspan of 16 cm for females and 13 cm for males. The species is highly sexually dimorphic, with the vivid blue, green and yellow males much brighter than the dark grey, brown and yellow females.

Richmond birdwing butterflies were once distributed in lowland subtropical rainforest habitat east of the Great Dividing Range from Maryborough, Queensland, to the south of Grafton, New South Wales. Today, the species is listed as vulnerable in Queensland following the clearing of its habitat and loss of suitable food plants, particularly the favoured food plant of the butterfly’s larvae — Pararistolochia praevenosa, which is also protected in Queensland and is listed as least threatened. Populations of this butterfly are now found only in two areas within Queensland — from Caboolture to Kin Kin, and from Nerang to Wardell in New South Wales.

A focus on feeding and breeding

Although adult Richmond birdwing butterflies feed on nectar from many species of flowering trees, shrubs and plants, including mountain aristolochia (P. laheyana) and even the flowers of some introduced garden plants, their larvae depend entirely on the birdwing butterfly vine (P. praevenosa) as host plants. By planting these vines, Wildlife Queensland hopes to encourage the butterflies to recolonise areas where they are now rare or locally extinct.

The captive-breeding program allows researchers to:

Growth all through the year

The Richmond Birdwing Conservation Network also works closely with community groups to ensure they have the necessary volunteers and resources to effectively undertake vine propagation projects. Throughout the year, vines were carefully planted and tended throughout the suburbs of Brisbane and the Sunshine Coast. A further 20 vines were also planted in Greenbank, Logan, and in October, 25 free vines were supplied to Noosa and District Landcare for a ‘Bring Back the Birdwing’ event at Gympie Regional Gallery, which also screened the webinar presentation.

Pararistolochia praevenosa seedlings grow rapidly, but the seeds take time and effort to extract. In 2022, seedling propagation will move to the Indigiscapes Centre in the Redlands so we can continue to make seedlings available for purchase from recommended nurseries throughout the state.

How you can help

The best way to help is to join the Richmond Birdwing Conservation Network (RBCN) and plant your own vines, particularly if your property falls within flagged corridor regions.

The Richmond Birdwing Conservation Network is particularly keen to increase the number of vines in identified corridors, as shown on this map (pdf), to provide the best chance of success and to link up other patches of suitable lowland subtropical rainforest. If your property falls within the orange or green areas on the map, and you would like to plant a vine to help build a birdwing corridor, please email birdwing@wildlife.org.au