Thank you to everyone for tuning in to our Richmond Birdwing Butterfly Webinar. We hope you enjoyed the event. Below you’ll find:

In this FREE one-hour Wildlife Queensland webinar, special guest presenters, Dr Ian Gynther (Department of Environment & Science) and Richard Bull (Richard Birdwing Conservation Network) provide a fascinating look at Australia’s largest sub-tropical butterfly, the Richmond birdwing butterfly. Learn about how a joint Captive Rearing and Release Project is helping to conserve this vulnerable species, and the secrets to cultivating and caring for birdwing butterfly vines, the Richmond birdwing butterfly’s host plant. You’ll also find out about the work of Wildlife Queensland’s Richmond Birdwing Conservation Network (RBCN) and how you can get involved. 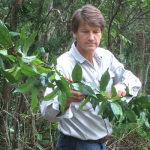 Dr Ian Gynther is a Senior Conservation Officer with Threatened Species Research and Monitoring in the Department of Environment and Science. He is also an Honorary Research Fellow in the Vertebrate Section, Biodiversity and Geosciences Program at the Queensland Museum. As well as his involvement with the captive-rearing and release of the Richmond birdwing butterfly, Ian has extensive experience in surveying vertebrate species across Queensland. He has led or participated in conservation and monitoring programs for a range of threatened birds and mammals, including Coxen’s fig-parrot, rufous scrub-bird, silver-headed antechinus, black-tailed dusky antechinus, yellow-footed rock-wallaby, New Holland mouse, Hastings River mouse and water mouse. He was also part of the team that in 2014 confirmed the extinction of the Bramble Cay melomys in Torres Strait due to anthropogenic climate change. As a member of the Queensland Government’s Species Technical Committee, Ian assists in providing advice and recommendations about the conservation status of species under the state’s wildlife conservation legislation. He is a co-editor of the Field Companion to ‘The Mammals of Australia’ (New Holland Publishers, 2013) and is co-editing a fourth edition of The Mammals of Australia, currently in production with New Holland Publishers. To date, Ian has authored or co-authored some 40 scientific publications. 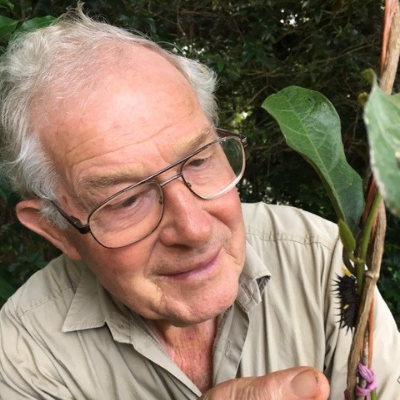 As a kid in New Zealand, I was always attracted to insects and at about 10 started a collection of beetles. Butterflies were very uncommon and NZ only had a handful of native species, but several were beautiful and I admired them greatly.

My first job was with NZ Wildlife Dept while I completed my Masters Degree and worked as a field ecologist for the Bird Hazard to Aircraft project prior to the commission of Boeing 737 jets by NAC. I applied for and got the job of Entomologist with the Bureau of Sugar Experiment Stations at Bundaberg and my wife, 2 babies and I moved to Australia. I was struck by the beauty and number of butterflies and after a research trip to PNG (where I met Don Sands) was blown away by the birdwing butterflies I saw all through the country.

After 20 yrs with BSES, we moved to Brisbane in 1988 to a new R&D entomology job with a multinational company and caught up with Don Sands again. Birdwings were recorded in the area and Don gave me 4 potted Pararistolochia praevenosa which I located beside rainforest trees I had planted at our property on the banks of Witton Creek at Indooroopilly. Those vines are still there and are now a massive curtain along the creek bank. We moved to Tamborine Mt in 2010.

Don Sands started the Richmond Birdwing Recovery Network around 1990 and I was the 1st paid-up member. It later amalgamated with Wildlife Queensland as Richmond Birdwing Conservation Network and I continued to the present as an active committee member.

Check back again soon to read our presenters’ responses to questions asked during the webinar.

There are lots of different ways you can get involved and help the Richmond birdwing butterfly.

If you have any questions or would like more information, please contact Wildlife Queensland on 07 3844 0129 or email: communications@wildlife.org.au