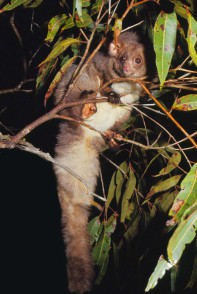 In May, along with 48 others, the greater glider was added to the Federal Government’s growing list of plants and animals on the brink of extinction, marking the biggest single addition to the 15-year-old list since 2009 and representing a 20 percent jump in numbers since this time last year.

With this significant and surprising increase, Australia is now home to 1872 threatened or endangered animals, plants and ecosystems. Ninety species are now declared extinct.

Among those now on the list under the Environment Protection and Biodiversity Conservation Act is our greater glider (Petauroides volans), an arboreal nocturnal marsupial and the largest of Australia’s glider species, with large furry ears and a short snout.

Restricted to eastern Australia, from the Windsor Tableland in north Queensland through to central Victoria (Wombat State Forest), the population of the greater glider is declining due to habitat loss, fragmentation, extensive fire and some forestry practices, and this decline is likely to be exacerbated by climate change.

The species is particularly susceptible to threats due to its low fecundity, specialist requirements for large tree hollows (and hence mature forests), and relatively specialised dietary requirements (the greater glider has adapted to feed almost exclusively on eucalyptus leaves, much like the koala).

Making it eligible for its recent listing as Vulnerable, the Threatened Species Scientific Committee considers that ‘the species has undergone a substantial reduction in numbers over three generation lengths (22 years), equivalent to at least 30 percent and the reduction has not ceased, the cause has not ceased and is not understood’.

In response, the federal Environment Department is developing a national recovery plan to implement management actions to secure the long-term survival of the greater glider. It is anticipated that Wildlife Queensland will be afforded the opportunity to participate in this process to help develop key aspects of the plan.

Wildlife Queensland’s Queensland Glider Network (QGN) will continue to champion the conservation of this species through a search for greater gliders in the Redlands region of Brisbane, beginning in August 2016. The Network was awarded funding through a Redland City Council Community Environment Grant to deliver a project on glider species in the area, with a focus on the greater glider. Through the project, QGN will run a community seminar and a series of spotlight events in an attempt to gain clear visual evidence of the species’ persistence in the area.