New Book Celebrates the Life of a Committed Conservationist

Adam Clark (1933–2020) was a grazier, farmer and passionate conservationist with Wildlife Queensland’s Upper Dawson Branch. Shocked by the widespread clearing of land for grazing, he acted to protect the remnants of native vegetation, which were now crucial habitats for threatened species. A new book tells the story of Adam’s life and his dedication to the cause. 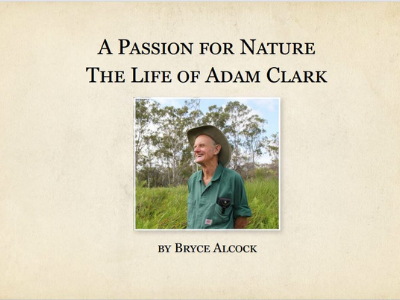 Adam became the driving force behind the Upper Dawson Branch and served in various executive roles. From the 2000s up until late 2018, Adam was the Branch Project Officer and interacted with various government and industry groups to gain protection for our environment, wildlife, historical and cultural heritage.

The branch faced its greatest challenge when a development boom came to the Dawson Valley – thousands of coal seam gas wells, huge coal mines and a planned mega-dam that would destroy wildlife habitats.

Adam and his fellow Wildlife Queensland members began an epic struggle. With the help of a newly discovered snail, Adclarkia dawsonensis, they prevented the destruction of the dam. At the same time, Adam pressured the coal, gas and power companies to minimise harm to the environment. His advocacy saved habitat and wildlife that would otherwise have been destroyed.

Adam’s many achievements made him a legend in the history of conservation in Queensland. His story is told in a new book written by Bryce Alcock, A Passion for Nature: The Life of Adam Clark. The book is beautifully produced and liberally illustrated with photographs and is now available in the Friends of WPSQ section of the Wildlife Queensland shop.