Orchid hunting has come a long way. In 5 steps you can join a national research effort

This article is part of a series first published on The Conversation explaining how readers can learn the skills to take part in activities that academics love doing as part of their work.

Orchid hunting conjures images from the 1800s – explorers in mud-spattered khaki, traipsing through the impenetrable jungle, overloaded with equipment: jars, bottles, bags and boxes, a gun (to shoot down tree-top orchids) and a magnifying glass. Things have changed a bit since then. You don’t need to sail halfway around the world – and all you need is a camera or smartphone.

Heidi Zimmer works at the Australian National Herbarium, home to one of the country’s largest collections of Australasian plant specimens. Her job is a mix of processing incoming orchid specimens (collected by researchers with permits), field work and research, guided by Dr Mark Clements.

Orchid hunting is like a treasure hunt. You can never be sure what you’ll find. And it can be fun for the whole family – Heidi’s 74-year-old father and three-year-old son (with the aid of jelly beans) are now avid hunters. They love the challenge of identifying finds: checking sources, looking for clues, eliminating suspects and the satisfaction of a positive ID.

So, how do you get started as an orchid hunter? The following five steps will set you on your way.

Step 1. Choose an area to explore

To give yourself a head start, check what species have already been found in the area using the Explore Your Area function at the Atlas of Living Australia. It’s a great resource, giving you access to more than a million biodiversity records.

Before you get overwhelmed, narrow your search to “monocots” (plants with one seed leaf) and “Orchidaceae” (the orchid family). Many records have photos attached. These will give you an idea of what you’re looking for.

There are records of orchids from around Australia’s coastline and hundreds of kilometres inland. You can find them in forest, heathland, grassland and even the desert – an example being the Desert Greenhood (Pterostylis xerophila).

You’re more likely to find orchids on undisturbed ground in natural vegetation. Australian orchids are mainly terrestrial – most of them grow on or in the ground. In much of the rest of the world, most orchids are epiphytes – species that grow on other plants, often high in rainforest canopies.

Many Australian orchids spend only a short time (days to months) each year above ground, before retreating to an underground tuber. Thanks to the rain this year, orchids that haven’t been seen in years are being found. Other orchids are bigger and in greater numbers than usual.

You can find orchids in flower at almost any time of the year. 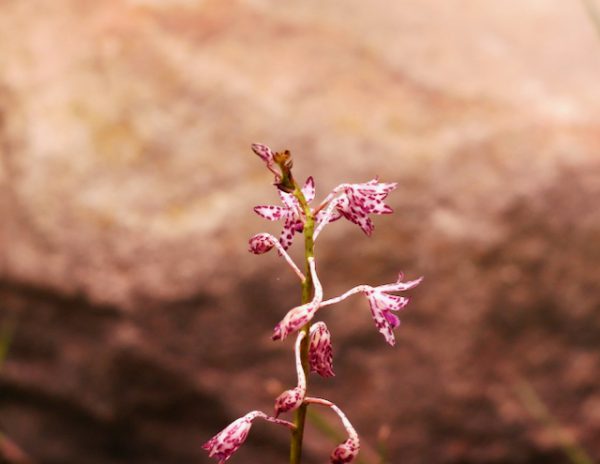 Peak flowering is in spring, when you can see colourful Caladenia, Diuris and Thelymitra. Species from these same genera can also be found over summer, along with Dipodium, Gastrodia, Paraprasophyllum and Spiranthes species. Orchids in the genus Dipodium, also known as hyacinth orchids, flower in summer.

In autumn, many Pterostylis emerge, as well as Acianthus, Corunastylis and Eriochilos species. Then even in winter some Pterostylis and Corybas species can be found in flower.

Wherever you go orchid hunting, please stay safe in the bush.

Step 3. Be curious, be observant

The work of documenting and protecting Australia’s biodiversity is far from done. New species of orchid are discovered each year, including by non-experts.

You sometimes see these findings reported under headlines such as “Fungi fossicker discovers ‘highly significant’ orchid species in Gold Coast hinterland” and “‘Like finding life on Mars’: why the underground orchid is Australia’s strangest, most mysterious flower”. Common to these stories, other than both the discoverers were actually more focused on fungi, is that they were out in the bush and noticed something that looked a bit different.

More than 28,000 orchid species have been catalogued across the world, including around 1,600 in Australia. Specimens of each species are kept safely in herbaria, a large proportion of them at the Australian National Herbarium. So there’s no need to take a specimen – we probably have one.

On the other hand, photos are non-destructive and can provide a valuable record. They not only show key features of the plant, but also the precise location in the image data if your phone or camera has location services turned on – or else consider taking a GPS.

Try to photograph the flower from a few different angles. For an expert to identify your find, they’ll need to see details of the petals, especially the labellum (the “pollinator landing pad”). Photos of the stem and leaves can be helpful too.

Step 5. Identify it – and tell us about it, if you want to

You can get help with identification in various ways, which also make your record accessible to others (including people who look at orchids for a job – like me). There are apps for citizen scientists to upload photos of their discoveries. Consider uploading yours to iNaturalist or Wild Orchid Watch.

iNaturalist uses machine learning to help with ID. While it might not always be spot on, it can point you in the right direction.

Experts verify sight records in iNaturalist. The records are then uploaded to the Atlas of Living Australia. There they are available for researchers and decision-makers to use.

You can also join a Facebook group such as Australian Native Orchids where members help with identification.

A note of caution about sharing images online: try to avoid making precise location information public. This includes metadata recorded when a photo is taken, so upload the image without it. Large numbers of visitors to a site can place any orchid at risk. And if you’ve been lucky enough to find a rare or threatened orchid, the risk of illegal collection is real.

Books can also help with identification. A good and comprehensive example is the recently published Complete Guide to Native Orchids of Australia. There are many regional guides too.

The focus of Heidi’s current orchid hunting is a collaborative project led by Dr Katharina Nargar at the Australian Tropical Herbarium. The goal is to sequence the DNA of one representative of every Australian orchid species – 1,200 have been sampled already. This research is improving understanding of Australia’s orchid biodiversity and evolution.

Contributions from citizen scientists are incredibly valuable in orchid research because they can cover much more ground than a handful of experts. Take a photo and enjoy the challenge of trying to identify the orchid. Even if it’s not a new species, it might be a new record for your area – which is pretty special too.

This article is republished from The Conversation under a Creative Commons license. Read the original article.