Black Swan Lake Heist? Not on! 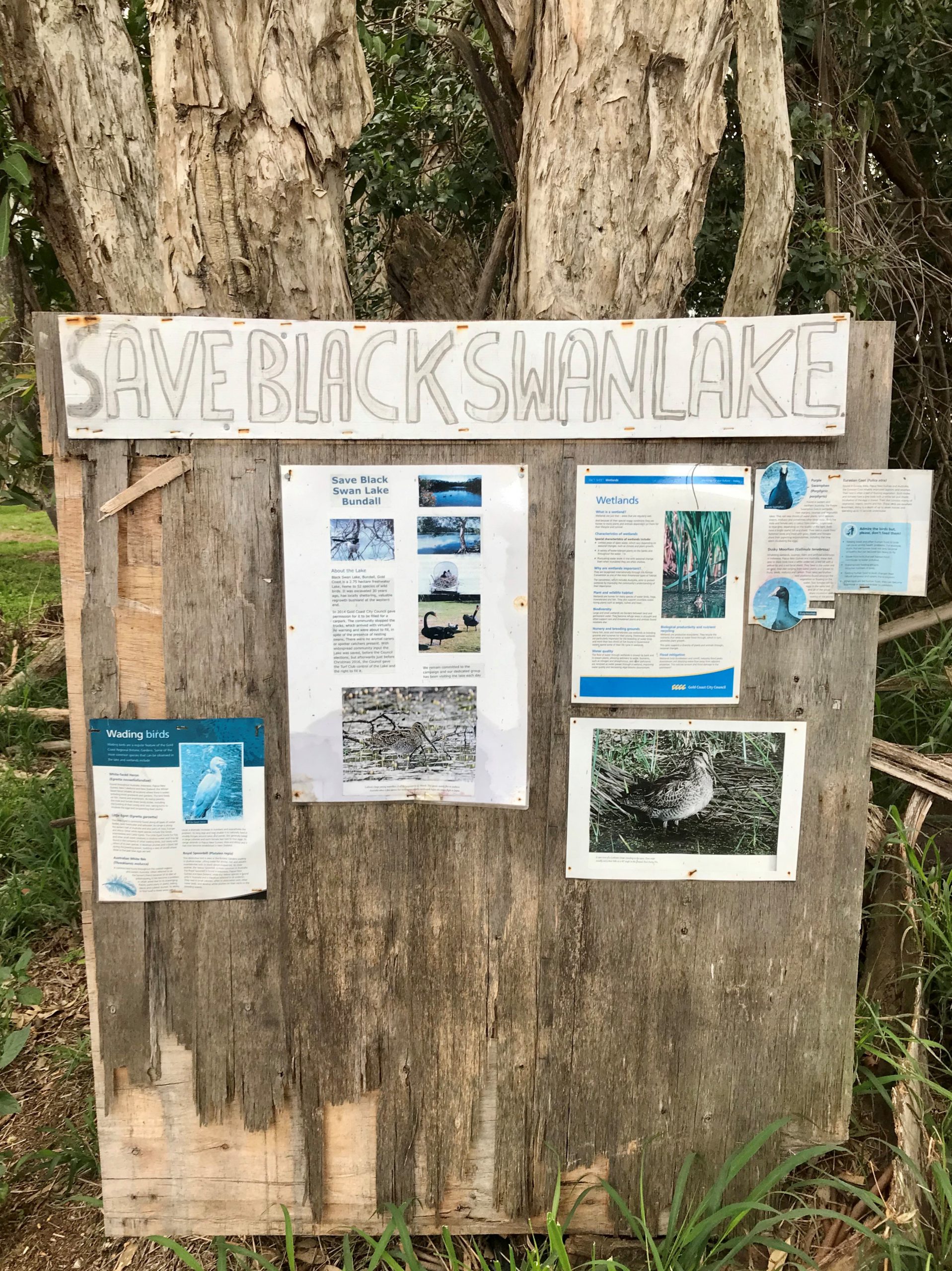 Black Swan Lake has been saved! The remainder of the lake at Bundall will become a permanent water body.

A majority of Gold Coast City councillors have backed a recommendation which confirms their ongoing support for Black Swan Lake. The six-year battle to save the lake has concluded.

An appropriate amount of funding would be included in a budget review. The solution will cost between $600,000 and $1.5 million.

Mayor Tom Tate, Deputy Mayor Donna Gates and Councillor Hermann Vorster did not vote, removing themselves from the debate due to perceived conflicts of interests. Councillor Pauline Young was absent.

Cr Bob La Castra speaking in support of Cr Young said it would be an abrogation of council’s responsibility to go back on a previous resolution to support the lake.

The ‘fate of the lake’ will be discussed at next Tuesday’s full council meeting on 1 September.

We need your help to save the remaining lake and our precious wildlife!

Courteously contact Council and the Turf Club (contact list provided below) and state you would like the lake remainder, our property, to actually remain and, if excavation of some of the fill is needed to enlarge its capacity, that is fine.

*No gathering at Lake or Council advised because of COVID new rules.

For further updates, visit the Save Black Swan Lake website.

A concerning report by the Gold Coast Bulletin (14/8/2020) has revealed that the Gold Coast City Council supermajority resolution regarding the preservation of the remaining public property widely known as Black Swan Lake at Bundall on Queensland’s Gold Coast has been called into question and Council is moving to infill the remaining 20 per cent of the lake.

At a full Gold Coast Council meeting on 29 October 2019, all councillors except the city’s major voted to retain the remaining undeveloped section of Black Swan Lake. This vote ensured the remainder of the lake – about 20 per cent of its original area – would be protected and maintained.

Gold Coast Council had previously approved infill of the entire lake to provide car parking for the Gold Coast Turf Club. Despite scientific evidence and against the informed advice of Wildlife Queensland Gold Coast and Hinterland Branch, 80 per cent infill occurred.

The supermajority vote in 2019 to preserve the remainder of Black Swan Lake was the culmination of a five-and-a-half-year-long marathon campaign by Wildlife Queensland Gold Coast and Hinterland Branch, along with community groups, to protect the 2.75-hectare freshwater lake, home to more than 65 species of wild birds, freshwater turtles and other wildlife, and valuable regrowth bushland.

Any further destruction and disturbance on the site itself, where fauna still shelter in abundance, would result in untenable loss of present natural site values with local habitat at a premium.

We need your help!

Please read the latest update (below) from Gold Coast and Hinterland Branch President Sally Spain to find out how you can help.

Dear Faithful Friends of the Lake,

Please read this, if you would, and see below for the path forward, whom to contact and part of the press article, revealing a contemplated Lake Take.

It does not seem a lot to ask that, when the Aquis Gold Coast Turf Club has expectations of receiving tenure over some 12 million dollars worth, or possibly more, of public property, that the 5,500 square metre remainder of the large lake that once was, should be preserved.

It does not seem a lot to ask that the Councillors and candidates who rode into City Hall with public goodwill at their back, because 20 per cent of a remarkable and beautiful Lake had not been trashed, should stand by that trust.

If the news has reached you that, after your and other decent community members’ efforts to defend the home of a remarkable official count of 65 species of birds, the remaining safe haven where many birds still shelter is at risk of being obliterated, you do have a right to feel betrayed.

There are claims the costs to maintain what they left, of the Lake, are too high.

The giving of a licence of a Lake, to fill in for horse pickings and car parking, plus an adjacent Gold Market Reserve Public Park, for a dollar a year seemed a little low.

Some solutions to ‘too high’ claims

Our path forward: How you can help to save the remainder of Black Swan Lake

— THE council in a shock move could fill in Black Swan Lake and help create another “wetland area” in the city at the cost of up to $1.45 million.

The Bulletin can reveal senior bureaucrats do not believe the management of what remains of the so-called “borrow pit” at Bundall is a realistic option.

Bureaucrats in reports on the water quality of the lake said it was difficult to work out where deposited horse manure and other waste was entering the “borrow pit”.

Sources suggest it will cost between $600,000 and up to $1.45 million for the borrow pit to operate as a permanent lake.

Councillors are to be briefed on a number of proposals which include options which enable the Gold Coast Turf Club to avoid the upkeep of Black Swan Lake but help provide funding to another environmental venture.

One option would be a new rental deal for the Turf Club in the equine precinct which could cover capital works to create a long term “wetland area”.

Sources understand the Turf Club has advised council that it will not be able to fund the amount of heavy works needed to ensure the lake reaches the proper water quality standards. —