Be Shark Aware and #GiveFlakeaBreak 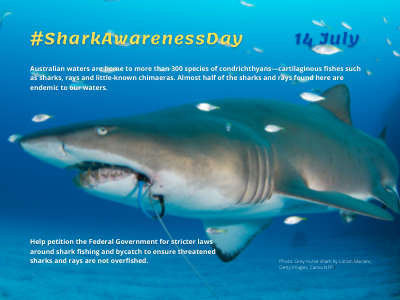 If there’s a list of creatures that suffer from bad PR, sharks and rays are certainly near the top …

…  which is why International #SharkAwarenessDay on Wednesday 14 July is so important.

Sharks are the oceans’ apex predators, so they play a crucial role in keeping marine ecosystems balanced. Australian waters are home to some 322 species of shark, ray, and chimaera—around one-quarter of the world’s total shark and ray species. Of those, around 50% exist nowhere else. However, their numbers are in decline, largely due to overfishing.

Worldwide, approximately 10 million sharks are killed and eaten by humans annually; that’s a whopping figure and magnitudes the number of humans killed by sharks.

Unfortunately, lax regulations around bycatch make Australia a global hotspot when it comes to shark and ray extinction risk. Here in Queensland, current legislation doesn’t even require trawlers to record the species or number of sharks and rays netted or thrown back, and many fish and chip shops sell shark under the ambiguous name ‘flake’. Some of these species may be seldom seen, little-researched or threatened.

If we don’t know exactly how many individuals of these species are being fished each year,
and they only exist here in Australia, how can we possibly prevent their decline?

Luckily, the Australian Marine Conservation Society (AMCS) has prepared a ‘Save our Sharks Digital Action Pack’, which includes educational information kits, ebooks, colouring-in activities and a super-cute video for kids that outlines the challenges faced by chondrichthyan ‘Aussie battlers’ like the greeneye spurdog (Squalus chloroculus, below) and the eastern angel shark (Squatina albipunctata).

They also spell out three simple steps you can take right now to help.

And if you really want to do a deep-dive into learning about these fascinating oceanic overlords, consider signing up to the AMCS’s webinar Shark Culling: How Much Progress Has Australia Made? (Wed 14 July 19:30 AEST), which features the cast from Envoy: Shark Cull and special guests.

We owe to our fishy friends to be more aware of sharks, whether we’re in or out of the water.