A united front for platypus recovery 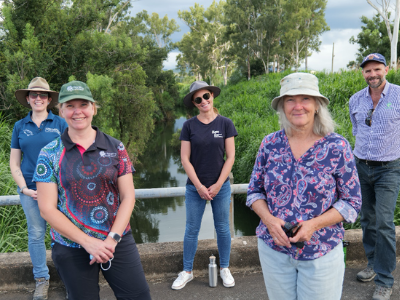 Very little information exists about the south-west Brisbane populations of these monotremes, so the community has come together to use eDNA to monitor this cryptic species.

Platypuses have been recorded over the years in the Lockyer Valley, but a big knowledge gap remains when it comes to understanding the connectivity and movement of populations within the area.

Changes in the landscape have added pressure to the freshwater ecosystems and the ability for platypuses to persist, especially when water resources are limited due to droughts and irrigation regimes.

Bushfires and flooding also impact the catchment of Laidley Creek and other tributaries in the region, which can impact waterways and create erosion, sedimentation and changes in flow.

How are platypuses faring after fires and floods? 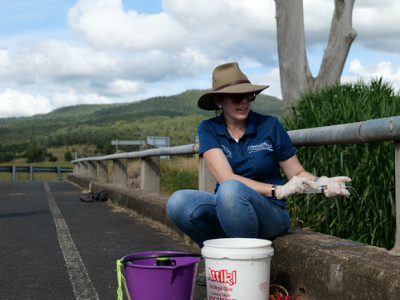 The environmental DNA (eDNA) technique helps identify areas where platypuses exist, so that rehabilitation and management of the waterways can be undertaken to ensure platypuses can thrive in the Lockyer Valley. But how those platypuses have fared during fires and now following the floods that have recently affected the region is another question.

‘Platypuses would wait out the worst in their burrows, but with a lot of water going through these catchments, burrow sites can be devastatingly inundated and destroyed. It is also the after-effects of flooding that cause them trouble,’ explains Tamielle.

‘For platypuses, sometimes a good top-up and a slow flush out of the system is beneficial, as it fills up the waterway and washes out nutrients and built-up sediment. More water also often means an increase in connectivity between habitats, so some platypuses move to places with a depth that is better for foraging. A flushed-out system can also improve the quality and quantity of aquatic larvae these monotremes eat, as once the floodwaters subside, more flow and a cleaner river system benefit these mammals, but it still takes time for systems to recuperate following extreme events.’

‘Unfortunately, widespread flooding affects almost all animals that occupy these ecosystems and leaves behind  mud, debris and pollution.’

‘The platypus is a robust species that has survived floods for millennia. However, we have exacerbated the threats to their habitat, so we need to monitor them to make sure they aren’t being pushed to the point of no return.’

How you can help platypuses

Have you ever seen a platypus in the wild? If so, you can make a valuable contribution to PlatypusWatch by telling us about your previous and recent sightings. Report your sightings: