A solution in sight for greater gliders – November 2016 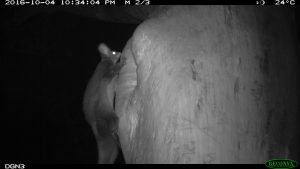 The results of the Queensland Glider Network’s recently completed project to document glider species in two conservation reserves in the Redland Bay region are in, with some notable findings regarding greater gliders. Funded through the Redland City Council as part of its Community Grants Program, the project combined spotlighting events with infra-red wildlife detection camera surveys to gain a better understanding of the nocturnal species living in the Greater Glider Conservation Area and the Days Road Conservation Area during September and October this year.

A number of animals were observed including squirrel and sugar gliders, brushtail and ringtail possums, koalas and powerful owls, with gliders observed on 80 per cent of the cameras aimed at or near tree hollows – a fantastic result!

The most notable achievement, however, was the observation of greater gliders in the area. Given the species’ recent listing as vulnerable (EPBC Act), these sightings were particularly rewarding for the survey team whose members and volunteers were left with an enriched appreciation of the important conservation values of our local reserves.

While spotlighting for nocturnal wildlife is a great way to measure the presence of animals in a given area, there is potential to disturb their natural behaviour in the process. Conversely, infra-red cameras are able to capture images of wildlife in the act of being wild, unawares. With the objective of collecting imagery of greater gliders, a tree climber was engaged as part of this project to install a number of cameras high in the canopy of large eucalypt trees, focusing on or near the openings of large tree hollows.

While an additional habitat analysis of the two sites (conducted by student intern, Courtney Peirce, University of Queensland, Faculty of Geography and Environmental Planning) displayed a number of differences between the two Conservation Areas, one striking similarity was the low number of hollow-bearing trees per hectare of land on the reserves. Tree hollows can be considered critical habitat for greater gliders; a limited number of tree hollows may equate to a lower greater glider population density, or worse, a complete inability of the species to inhabitant an area otherwise suitable in every way. 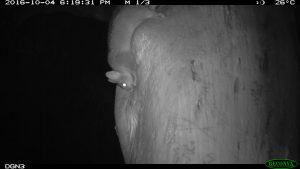 An undesirable outcome of a low number of tree hollows suitable for greater gliders is competition for this resource from other large-bodied hollow-dependent native animals, particularly brushtail possums. Evidence of this competition was captured by our infra-red cameras: on two occasions, both species were observed at the same hollow within a few short hours. As greater gliders are understood to be more timid than brushtail possums and less likely to compete well for limited resources, this is not a good situation for this vulnerable species to find itself in.

But how can this issue be resolved? While we cannot speed up the process of hollow development in trees, we can install nest boxes in suitable locations in an effort to replicate tree hollows. The QGN’s nest box monitoring programs in Brisbane have highlighted how successful and important nest box programs can be. It is very likely that a nest box installation program in these two Redlands reserves will provide suitable replacement habitat for greater gliders in the area.

With this goal, Wildlife Queensland has designed a project targeted at counteracting this habitat shortage and safeguarding our vulnerable greater gliders against further decline. Through our recently launched Greater Idea appeal, we are now seeking much-needed funding to make these important works happen. Donations can be made simply by clicking here and are very ‘greater-fully’ received.